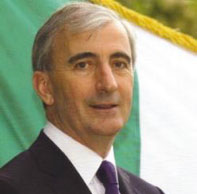 Gay Mitchell was a member of Dáil Éireann for 26 years.  He was Minister of State at the Department of the Taoiseach and at the Department of Foreign Affairs, being Minister forEuropean Affairs at both departments (1994 – 97).  He led preparations for our EU Presidency in 1996 including negotiations on the Maastricht Treaty, as a Member of the European Reflection Group.  He was also Minister for the International Financial Services Centre and Local Development at the Department of Taoiseach.  He was Shadow Minister for Foreign Affairs; Justice; Health; Tourism and Transport; and Public Service.  He is a former Chairperson of the Dáil’s Public Accounts Committee (PAC) and of the Committee for European Affairs of both Houses.

WhenChairman of the PAC he set up and chaired the Advisory Group on Public Financial Accountability, which included the Comptroller and Auditor General and the heads of the accounting bodies.  This recommended the introduction of Value for Money auditing, as well as updating Regulatory audit.  He is author of By Dáil Account – Auditing of Government, Past, Present and Future, published by the Institute of Public Administration (2010); and of many policy documents and newspaper articles.

He chaired the European Parliament’s Working Group on Epilepsy.  He is Chairperson of the FutureNeuro Governance Committee on Epilepsy and Motor Neuron disease at the RCSI.

A former Lord Mayor of Dublin he is a Chartered Company Secretary and has a BA in Theology and MA in Bible Studies, Dominican Priory Institute/TUD, a MSocSc(Politics) QUB, and a MSc in Finance and Accounting, Northampton University.

Married to Norma, they have four children and seven grandchildren.  His interests include reading 19th and 20th Century European history; Politics, Golf, the Art and Craft of Coach building, and Gilbert and Sullivan operetta.